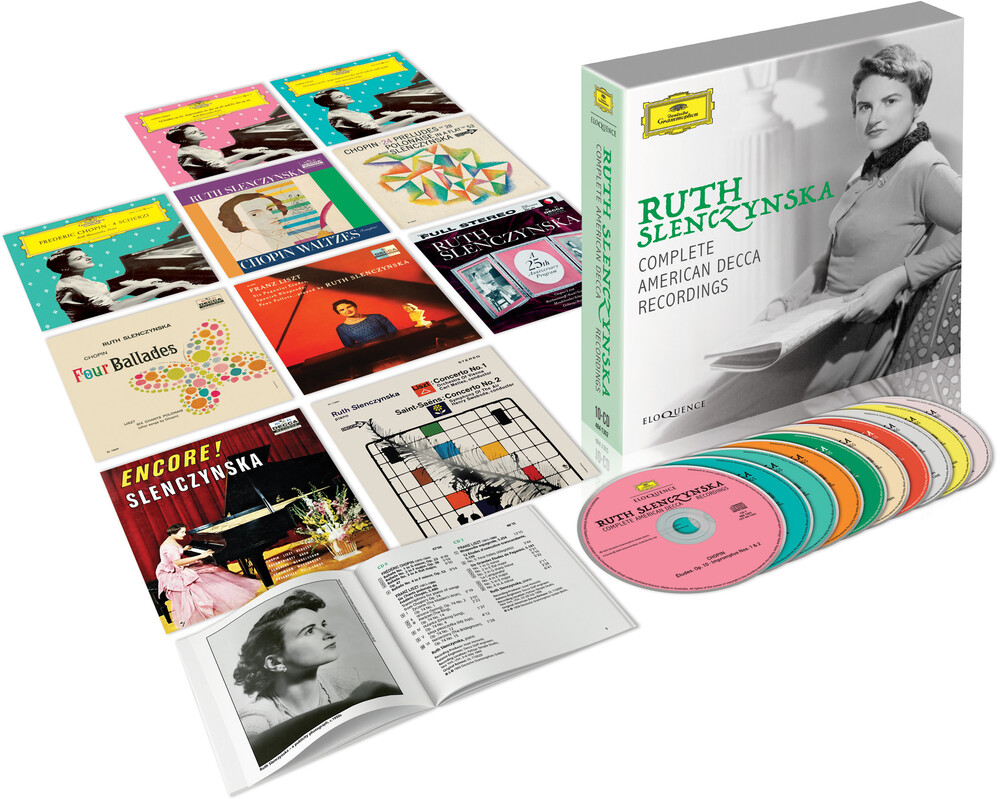 A debut on CD for the American Decca legacy of Ruth Slenczynska, a prodigious Romantic-age keyboard lioness. The biography for her Wigmore Hall recital in March 1957 claimed that the 32-year-old Ruth Slenczynska had given 1600 concerts. Scarcely believably, perhaps, but no less so than other elements of her extraordinary life story - making her public debut at the age of four, under the instruction of a tyrannical and abusive father, playing a Mozart concerto at the Salle Pleyel in Paris just three years later, attracting the admiration and tutelage of Cortot and Rachmaninov, apparently burnt out before adulthood. A first marriage and highlights such as playing for (and duets with) Harry Truman followed. Touring with Arthur Fiedler and Boston Pops in the mid-50s taught Slenczynska how to work an audience and to draw strength from their attention, but she readily understood the imperatives of the microphone. The year before her Wigmore Hall date she began recording for the American Brunswick division of Decca at the label's New York studios, and once their sales were boosted by the publication of her painfully honest autobiography in 1957, her albums won acclaim on both sides of the Atlantic. She has continued to perform and to teach well into her 90s, but this box is the first comprehensive tribute to her artistry. Born in California to Polish parents, Slenczynska was a Chopin pianist by nature and nurture, with a temperament and background that tended towards the extremes of the Romantic style, abounding in rubato and timbral nuance. The facility and security of her technique were shown to best advantage by the Études (1956), then the Scherzos (1957), followed by a selection of waltzes (1959), the Ballades and Polish songs arranged by Liszt (1960) and the Préludes (1962). A Liszt album from 1958 tests her bullet-proof technique with the exigent demands of the Rhapsodie espagnole, Feux follets and the most gravity-defying versions of the Grandes Études de Paganini. A mixed recital from 1957 marks the silver jubilee of her debut at New York City Hall. The Brunswick discogrpahy is rounded off with a disc of encores (1959) and a pair of concertos, Saint-Saëns' Second (1959) and Liszt's First (1963). By the time of these recordings, Slenczynska had thrown off the prodigy tag and her musicianship had matured accordingly from machine-tooled virtuosity to lyrical fantasy. The pianism presented here is extraordinary, and shows no trace of a performer who had learned her craft through the harshest discipline and punishment. The first release of these albums on CD is celebrated in style by Eloquence with an 'original covers' box and a booklet full of hitherto unpublished photographs and memorabilia as well as a new survey of Slenczynska's life and studio career by Stephen Siek.