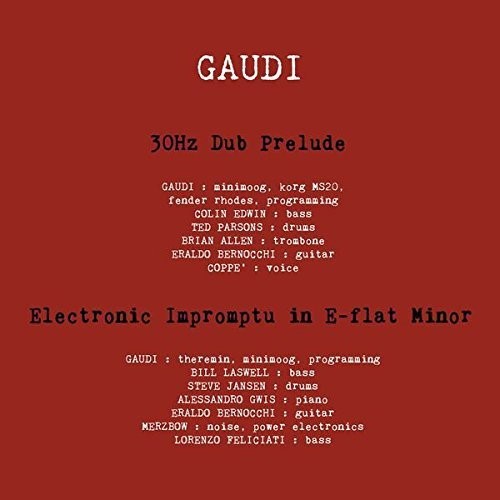 This 10 WHITE Vinyl EP is the first manifestation of an exciting collaboration between London based music producer / performing artist Gaudi and the ever classy champions of genre-bending and experimental contemporary music, RarenoiseRecords. This hot-off-the-press taster, which will also be available in multiple DL formats, is an introduction to the forthcoming full length release, to be titled Magnetic, due to be released late Spring 2017Gaudi, a much respected producer and performer with 15 studio albums under his belt, has been working to dissolve musical boundaries for over 35 years now, and is best loved and noted for his genre blending and high quality dub-centric productions. He has been let loose in the RareNoise vaults and has set himself the creational challenge of composing an album of entirely new music using the full palate of the RareNoise catalogue as his orchestra.Gaudi is no stranger to this kind of undertaking having previously taken on the challenge of composing and producing an album of new music working with vocal parts from archives of legendary Nusrat Fateh Ali Khan. The result of this multi-year endeavor, released with the title Dub Qawwali, earned him a nomination for a BBC World Music Award: It was not only a beautiful and sensitively handled piece of work, but also a landmark album in which the very concept of remix was taken to the next level to become re-composition. In this respect, 'Magnetic represents an even greater challenge than Dub Qawwali: the sheer breath of the source material offered by the RareNoise catalogue, which spans a high dimensional manifold of genres, has stimulated and challenged Gaudi to work with a vast array of styles, instrumentation and flavors in order to create the master blend, a true challenge of distillation.Side A of this 10 Vinyl EP is home to the track 30Hz Dub Prelude and there s no mistaking from the first bar that this one is all about the bass - provided by an unrecognisable transfiguration of underlying RareNoise source catalogue material originally featuring artists Colin Edwin, Ted Parsons Eraldo Bernocchi and Coppé. Gaudi plays Minimoog, korg MS20 and fender rhodes. The trombone of Brian Allen (member of Brainkiller) draws you in and leads you as it meanders like a liquid brass river through the track.Side B is a more subdued affair. Electronic Impromptu in E-flat Minor is an evocative time-slip into subjective reverie. A melancholy piece featuring transfigurations of a multitude of source catalogue multitracks originally featuring Bill Laswell, Lorenzo Feliciati, Masami Akita, Eraldo Bernocchi, Alessandro Gwis and Steve Jansen, as Gaudi s trademark Theremin encompasses all with it s unmistakable and luring voice..In this project Gaudi has become like the master blender at the whisky distillery... Carefully searching through the warehouses to find the right flavours, taking a hand picked selection of the best spirit of the RareNoise stable and from amongst their individual notes and character, creating his own unique blend - the RareNoise signature malt!