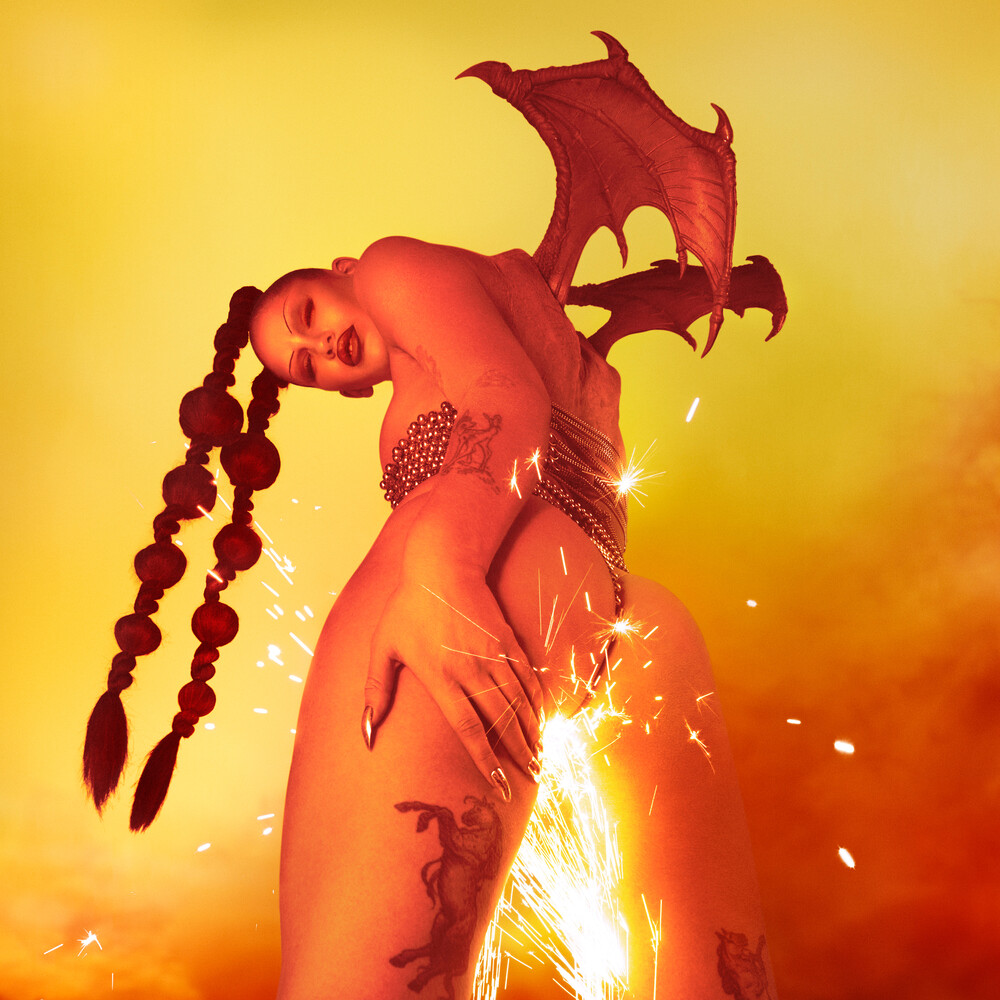 Phoenix: Flames Are Dew Upon My Body
Artist: Eartheater
Format: Vinyl
New: OUT OF STOCK. Contact us for availability.
Wish

DISC: 1
1. Airborne Ashes
2. Metallic Taste of Patience
3. Below the Clavicle
4. Burning Feather
5. How to Fight
6. Kiss of the Phoenix
7. Volcano
8. Fantasy Collision
9. Mercurial Nerve
10. Goodbye Diamond
11. Bringing Me Back
12. Diamond in the Bedrock
13. Faith Consuming Hope

Composed, produced, and arranged by Eartheater alone, Phoenix: Flames Are Dew Upon My Skin draws a path back to the primordial lava lake from which she first emerged, as it also testifies to the reincarnating resurrections the project has undergone over it's first full decade of existence. While the album renewsher focus on guitar performance and legible structure, Eartheater balances the unabashed prettiness of acoustic harmonic songs with the dissonant gestural embroidery of oblique instrumentals. Having fallen back in love with the idioms that first captivated her, she worked to crack open the techniques that had fossilized inside of her, while still seeking to apply the electro-alchemical knowledge she picked up along her journey. The result of a laborious revival in fire, Phoenix recontextualizes Eartheater's combinatorial approach to production within her most confident abstractions, adjacent to some of her most direct songs to date.Eartheater composed and workshopped most of Phoenix over a ten-week artist residency (FUGA)in Zaragoza, Spain, housed in a sprawling, cubic glass facility that looked out over wildflower-flecked mountains. Following an intensive period of recording and touring, the residency provided her with an unprecedented period of solitude in the small Spanish town. Her newfound sense of isolation ultimately became liberating, leading her to sidestep the crutches and steady grids inherent to electronic music,and to conceive pieces rooted in her guitar and her desire to perform with other players live. Eartheater's voice glows brighter than ever at the center of Phoenix's arrangements - her familiar operatic highs are grounded by newly expanded velvety lows, leaping lucidly up and down octaves. Her intricate guitar work flits across baroque fingerpicked passages and latches into cyclical figures that meet her voice in lush harmonic progressions. From her own guitar parts, to the orchestral string arrangements she wrote for the Spanish conservatory group Ensemble de Camara, to the harp and violin lines performed by her close friends and collaborators Marilu Donovan and Adam Markiewicz of LEYA, Eartheater's applications of acoustic instruments bring an extraordinary emotional emphasis to her compositions. Phoenix prepares for a future where electronic sound - or even electricity itself - isn't guaranteed, but where her music could still come to life with a group of hands dexterously winding across instruments against the light of the fire.Eartheater drew inspiration for Phoenix from geological imagery, whose turbulence and potential for genesis mirror the trajectory of her own life and relationships. The album's instrumental pieces directly reference these moments of upheaval, colliding audio of volcano and lightning storms with resplendent string and vocal arrangements. "Volcano" looks out over the album from it's peak at the center, it's tectonic plates colliding in towering melodies and layers of vocal harmonies, as piano accents crest and cascade down the mountainside. When Eartheater sings, "I'm still building mountains underground," she is trying to reconcile the pinnacles of her ambition with the comforts of a simple existence buried beneath the surface. "Diamond in the Bedrock" finds her admiring the gemstone forming under intense pressure inside her, but rejecting the romantic promise that the diamond signifies, choosing instead to escape a relationship that has come to stifle her.With the album's subtitle, Flames Are Dew Upon My Skin, Eartheater imagines being tempered to a state of perfect equilibrium, suspended between melting and freezing, where fire could streak across her body and appear as a crystalline blush. This image captures the tension at the heart of the Eartheater project, as she decides how best to distill her passion and render it cool to the touch; to find beauty in simple pleasure, while keeping one eye fixed on the peaks that loom in the horizon.The album is mixed by Kiri Stensby and mastered by Heba Kadry, featuring photography by Daniel Sannwald