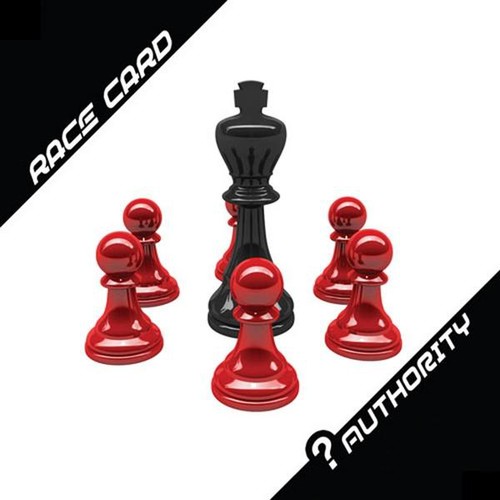 Race Card's sophomore release '? Authority' (pronounced 'Question Authority') comes at a time when great changes are happening around the world. Rooted in the concept that political and media manipulation has sickened our culture and removed power from the masses, '? Authority' tells us that freedom of speech is yours, if you are willing to sacrifice for it. Among the Rock hooks and syncopated rhymes is a clear (and sometimes uncomfortable) message that in order to keep our way of life alive, we must question the very authority that we grant the power to rule us. A concept album, yes. Lacking in hooks, melodies and raw energy? A resounding, NO. It's also not all doom and gloom either. Cuts such as 'Rock With Me' and 'Programmed' take the edge off and lighten the feel, while still retaining the album's deep message. '? Authority' conceals it's seriousness in lush distortion, feel good hooks and tightly woven lyrics, that you could hear equally at an all night party, a civil rights rally or an action movie trailer! Listen. Enjoy. Think. Repeat. About Race Card: Rapper/vocalist, Tahir Jahi, has enjoyed abundant shares of shine and various successes ever since he began rhyming at the age of 15. While other kids were squabbling over tennis shoes and cutting class, a young Tahir was mastering a craft all his own, competing in local battles, performing on occasion, and honing an artistic, standout, and standalone mic style. He met guitarist and singer, Damian Hagger, in 2000 when they both worked at MP3.com. Guitarist and vocalist, Damian Hagger, is also an African-American... Ok, not literally, but spent part of his childhood in South Africa and the rumor is that his first words were spoken in Zulu. After high school in Singapore and South Africa, he was accepted to study at the prestigious Berklee College of Music in Boston. Damian graduated cum laude from Berklee in 1998 with a Bachelor of Music in Contemporary Writing/Production and Music Business.